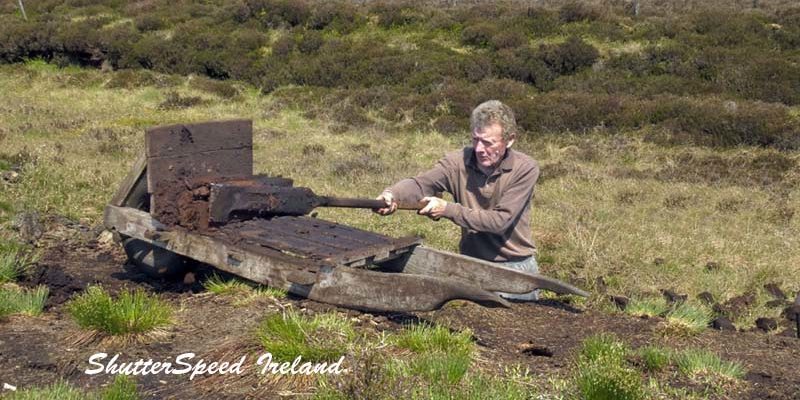 A Brief History Of Peat
Along with rural Irelands many breath-taking and picturesque scenes, ShutterSpeed Ireland has captured ancient traditions and crafts that have been used for hundreds of years. One of these ancient traditions is the art of cutting peat in a bog, once the peat has been cut the peat is then known as turf and this is a practice that still continues today around most of rural Ireland as they use the turf as a fuel source.

Since at least the 17th century the people of Ireland have been cutting peat in a bog from the vast bogs that are found across Ireland. Once the peat has been cut into turf it is then mainly used as a source of fuel although it does have other uses as well. The practice of cutting peat in a bog is still widely used although it is mainly rural Ireland that still practices this today.

Most modern bogs or peatlands were formed around about 12,000 years ago and because the peat is made from decaying organic materials the peat often preserves the history of the plants including pollen. This is of great use for scientists as they can use this information for their studies into the past and build a more accurate picture of how the climate has changed over thousands of years.

Scientists are able to study the peat to see a historical record spanning the ages of what kind of vegetation was growing at the time, how environmental conditions have changed and they have even found preserved bodies which studies have then discovered to be ritual sacrifices.
As you can see peat or turf as it sometimes called can hold many secrets that are discovered with further exploration. 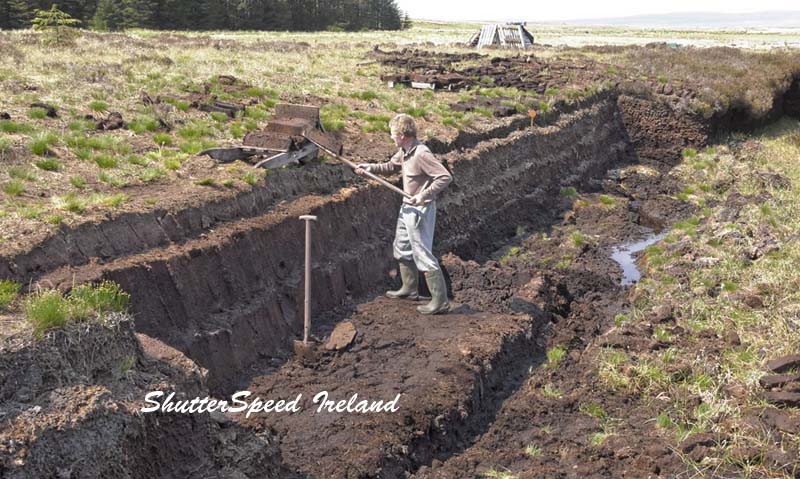 Cutting Peat with a spade from a Peat Bog In Ireland

How Is Peat Formed?

Peat is formed naturally over a long period of time as vegetation or organic matter decomposes. The peat is naturally found in areas that are either called peatlands, bogs or moors and indeed Ireland is well known for its large bogs that provide an abundance of peat. In Europe, only Finland and Russia still have this resource available in large quantities although the peatlands in Russia are mainly frozen solid.

The peatland or bogs are known to have a finely balanced ecosystem that is regarded by scientists as an extremely efficient carbon sink, one of the best on Earth. The peatlands work so well because the peatland plants capture CO2 that is released from the peat which helps maintain
a balance.

In natural peatlands, the rate at which biomass is produced is larger than the rate of decomposition but it can take many years, thousands of years even for the peatlands or bogs to become large enough to harvest peat. The peat usually builds up at a rate of about a millimetre per year so as you can see it is not something that would be quick to replace.

Peat has to be formed in wet conditions as part of the process means the peat holds water. This also causes the wetland to expand. The reason it works this way is that the flood water or stagnant water reduces the oxygen available which in turn slows the rate of decomposition.
If left long enough the peat then begins the formation of fossil fuels such as coal including low-grade coal known as lignite.

The Key To Peat In Ireland

There is a secret world within the Sphagnum Moss with each one hosting tiny plants and animals. Within a few droplets of water, there are tiny, microscopic creatures such as the desmids, diatoms, algae, cyanobacteria, amoebae, rhizopods, flagellates, ciliates, rotifers, worms, roundworms, flatworms, and heliozoans. It is a truly amazing ecosystem in each individual Sphagnum Moss.
The Sphagnum Moss combines over the whole peatland which in turn means that any larger animals there can feed on the microscopic plants and animals.

In the peatland, there can be pond skaters, dragonflies, damselflies, caddisflies, mosquitoes, midges, bloodworms, water boatmen, water beetles, water lice, and frogs. As you can see there is an incredible array of wildlife that is entirely supported by this terrific moss that binds the peatland all together.

Thankfully as we build a better understanding of how nature works we have realized the need to protect the Sphagnum Moss. Once upon a time, it was used for things like bandages, there are also still some people today that use it in their own garden although this is not recommended. 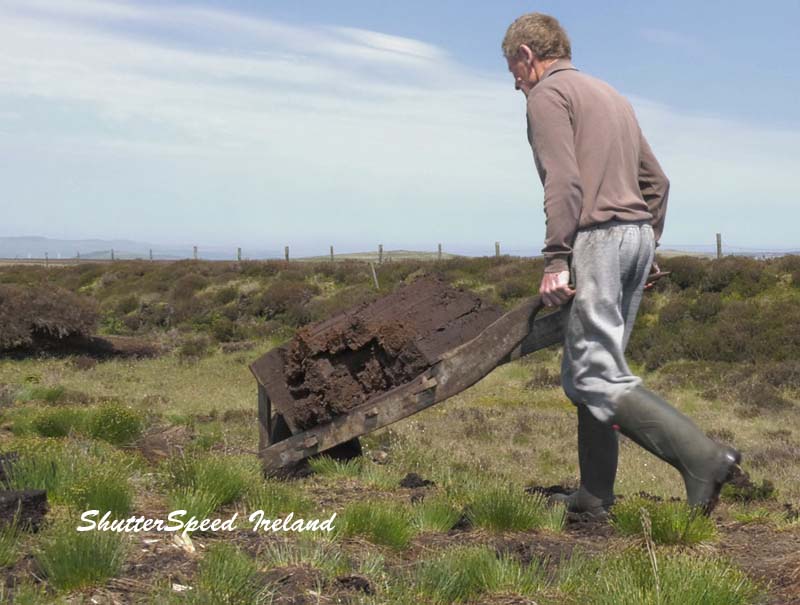 Cutting Peat with a spade from a Peat Bog In Ireland

There are three main types of peat, peat material is usually one of Fibric, Hemic, or Sapric –
Fibric peats are the least decomposed and contain the least fibre. Hemic peats are partially decomposed. Sapric is the most decomposed.
Another type of peat is called Phragmites which is made of reed grass and there are also peats including Phragmites Australis plus other grasses.

This Phragmites peat is usually found to be denser than the others.
Sometimes soil with a high amount of organic material is called peat but this can cause problems as this soil has poor consolidation properties so it cannot be used as a stable material for constructing things like roads or buildings.

Where Are Peatlands Found

Peatlands have adapted to extreme conditions of high water and low oxygen, toxic elements and low availability of plant nutrients. Their water chemistry varies from alkaline to acidic. Peatlands can occur anywhere, from tropical to boreal, arctic zones from sea level to high alpine conditions.

In modern-day Europe, Ireland has vast peatlands that are known as bogs and there are other peatlands across the world in countries such as Finland and Russia.
Peatlands are truly worldwide and seemingly capable of growing anywhere. 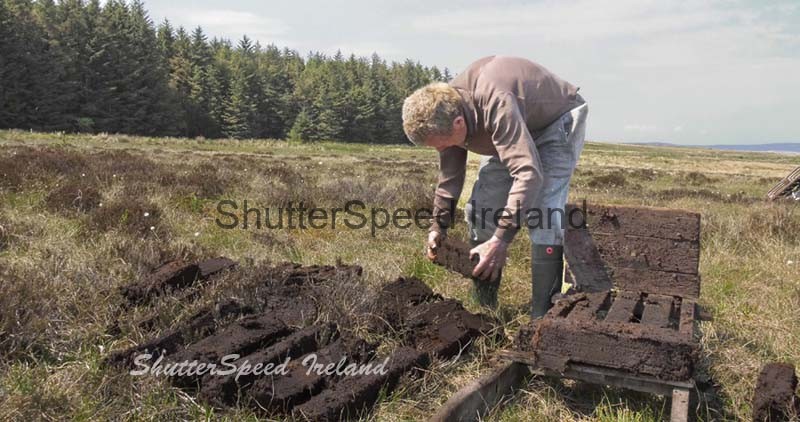 Although humans have many uses for peat, it presents severe problems at times. Whether the peat is wet or dry, it can be a major fire hazard.
Peat fires can burn for great lengths of time, or smolder underground and reignite after winter if an oxygen source is present. Because they are easily compressed under minimal weight, peat deposits pose major difficulties to builders of structures, roads, and railways.

For example, when the West Highland railway line was built across Rannoch Moor in western Scotland, its builders had to float the tracks on a multi-thousand-ton mattress of tree roots, brushwood, earth, and ash.

Peat And The Environment

The Earth is currently undergoing a climate change that is unprecedented in our recent history. A big worry is the impact on the climate that peat can have, specifically the release of carbon dioxide and methane gas that occurs when peat is either burned or thawed.

In Russia, they have the world’s largest peatland which is currently frozen but studies have shown that it is now thawing. If this continues as expected then the results could be devastating as all of the stored methane gas could then be released back into the environment.

Another devasting environmental impact is the drainage of peatlands to use for agricultural purposes. Draining the peatlands not only affects the wildlife but also means the carbon that was held in the peat will be released into the atmosphere which will contribute further to climate change

The final environmental impact of peat is fire. We touched on this earlier as peat is a fire hazard whether it is wet or dry. With the warming of the planet, this is giving more chances for fires to spontaneously start and there are cases including in the Arctic in 2019 of peat fires starting that hadn’t before. The result of these peat fires is the release of more carbon dioxide into our atmosphere. 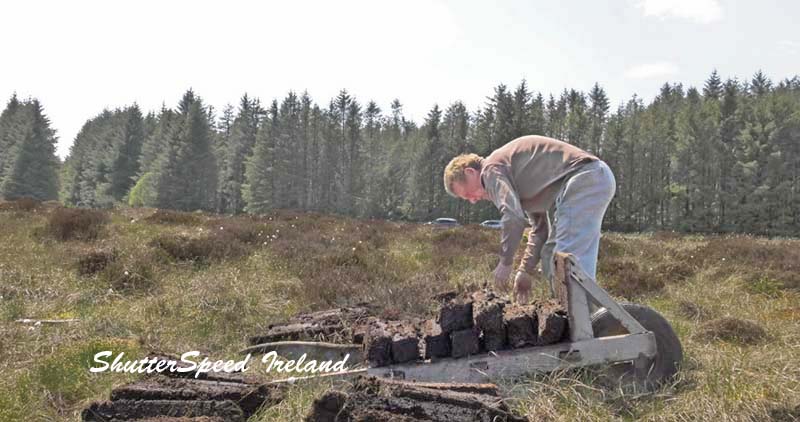 Under pressure, water is forced out of peat, which is soft and easily compressed, and once dry can be used as fuel. In many countries, including Ireland and Scotland, peat has traditionally been used for cooking and domestic heating, and peat is stacked to dry in rural areas. It remains harvested on an industrial scale for this purpose in countries such as Ireland. Its insulating properties make it useful in industry.
Peatland can also be a source of drinking water and around the world does provide water to be stored in reservoirs.

As you can see peat as an interesting resource that has many uses, it is very versatile and can grow just about anywhere. The peatlands in rural Ireland support a vast array of wonderful wildlife.
Turf cutting in Ireland still happens today although on a smaller scale than in the past and mainly across rural Ireland. It is a tradition that has existed for hundreds of years and for as long as there is still a peatland the turf cutting will still go on.

ShutterSpeed Ireland have a wide selection of enchanting photographs and video footage of Cutting Turf from a Peat Bog In Glens of Antrim Ireland here
Multimedia arranged by Ballygally View Images here
Are you visiting The Glens of Antrim? For more infornattion on N.I. click here
Giants Causeway website here
Looking for a tour guide? Shutter speed Ireland can reccomend ‘Milliken Tours Ireland’
A professional, family run tour group who will go that extra yard to make your visit to our country fun filled and memorable.  Contact them here