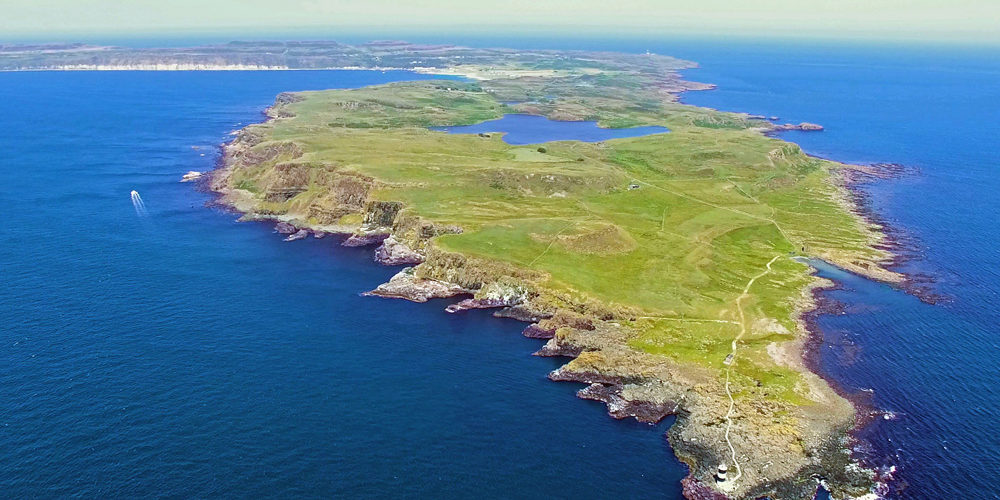 Part of the Causeway Coast and Glens

Rathlin Island is an island and civil parish off the coast of County Antrim in Northern Ireland and is the only inhabited offshore island of Northern Ireland, with a population of approximately 130 people, and is the most northerly inhabited island off the coast of Ireland.
Rathlin Island is 3.5 miles from east to west, and 2 miles from north to south. 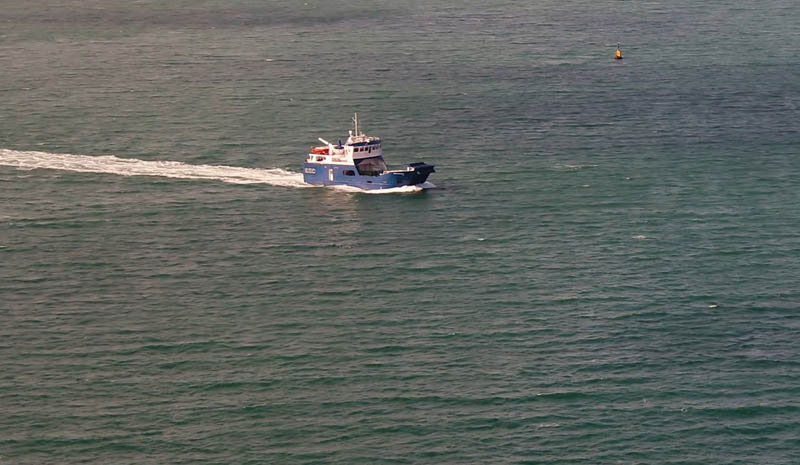 Rathlin is the northernmost point of the Antrim Coast and Glens Area of Outstanding Natural Beauty.  Rathlin is one of Special Areas of Conservation in Northern Ireland and boasts Northern Ireland’s largest seabird sanctuary.

At the Seabird Centre, you will see close-up views of Northern Ireland’s biggest seabird colony, puffins and other seabirds congregating in their thousands to breed from April to August. Children’s binoculars are available and theres child-friendly assisted telescope viewing.

From the visitor centre it is a short scenic walk and 900 steps down to the viewing platform, where binoculars and telescopes are available. As part of Irish Lights’ Great Lighthouses of Ireland trail’, visitors can also find the unique ‘upside down’ lighthouse, learning about its history and the people who lived and worked in it. There are a further 50 steps to the bottom of the lighthouse tower. 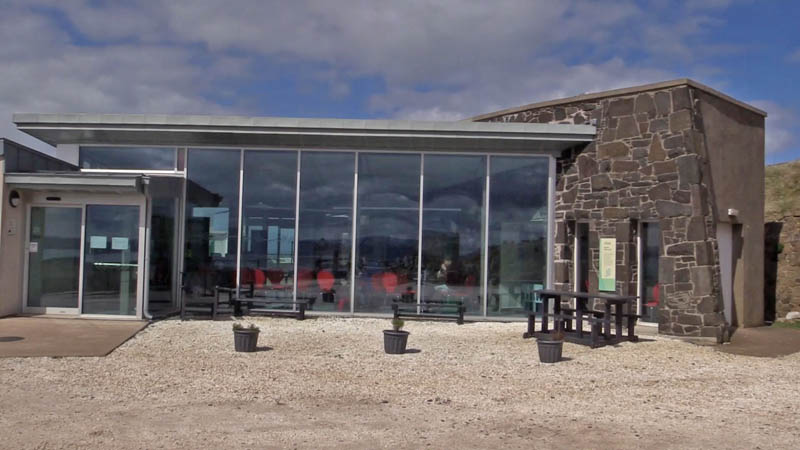 Fulmar- Watch for their trademark stiff-winged flight around the cliffs.

Kittiwake- Visit Rathlin in spring and summer and your ears will be filled with the unmistakable ‘kitti-wake’ calls.

Puffin- Enjoy the comical antics of puffins in spring and early summer.

Razorbill- Typically spend all of their time in the sea, only coming to land to breed between March and July.
Arrival of seabirds April/May. Departure of seabirds – early July.
You can see large flocks of birds gathering to feed, or flying at dusk to form large roosts to keep warm.

Rathlin Island is comprised mainly of rugged cliffs, unimproved grassland managed for corncrake and chough. There are also several lakes. 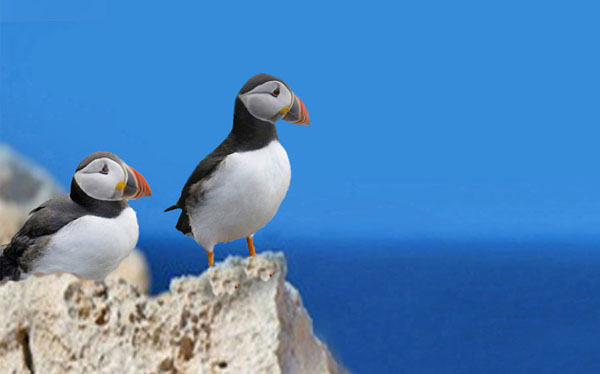 Species have now returned to breed

Roonivoolin at the southernmost tip of the island, is important for wildlife especially, Chough, which feed there, also Lapwing, Corncrake, Snipe and Irish Hare.
They have also been working to create ideal habitat for Chough and Corncrake at Church Bay, Craigmacagan, Knockans and Roonivoolin reserves.

Their work aimed at creating ideal habitat for Chough and Corncrake is starting to prosper.
The species have now returned to breed following a 20 year absence.

A wide variety of other birds can be seen on Rathlin, including Stonechats, Peregrine, Manx Shearwaters, Buzzards, Wheatears and Skuas. Breeding Lapwing, Sedge, Snipe, Warblers and Reed Buntings. All can often be seen on the freshwater marshes. Little Grebes, Tufted ducks, Moorhens and Coots can be seen in small loughs along the roadside. 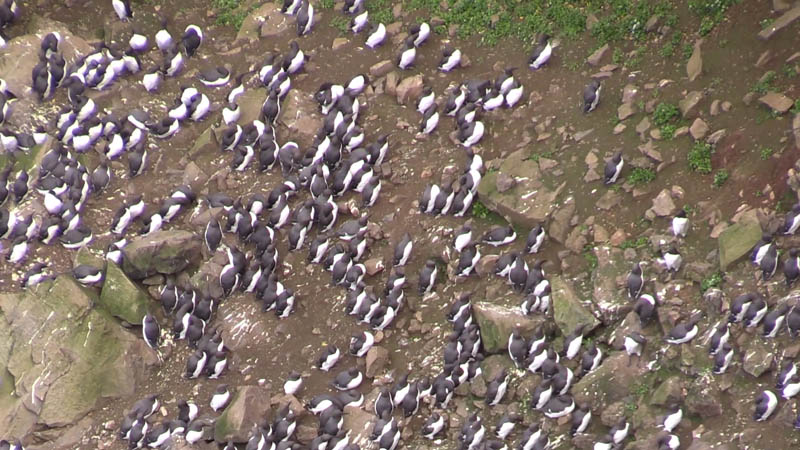 Identification of  a new species of sea anemone

Grey and Common Seals are generally seen basking on the rocks around the island and occasionally schools of porpoises and dolphins can be frolicking in the Channel. There are also some of the rarer species of Bats near one of the Churches.
Wild Irish hares breed on Rathlin including the more unusual ‘Golden Hare’.
It is a distinctive golden colour and blue eyes.

A wide range of interesting and often rare wild flowers brighten the island in spring and summer. In spring yellow gorse blossom, (known locally as whin’s) covers the highland to be replaced later in the year with western gorse, with the various shades of purple produced by three species of heather. Orchids and primroses also provide colour at different times of the year.

Marine investigations in the area have also identified a new species of sea anemone, rediscovered the fan mussel and a number of shipwreck sites, including HMS Drake, which was torpedoed and sank near the island in 1918. According to the Annals of Ulster, Rathlin was the site of the first Viking raid on Ireland. 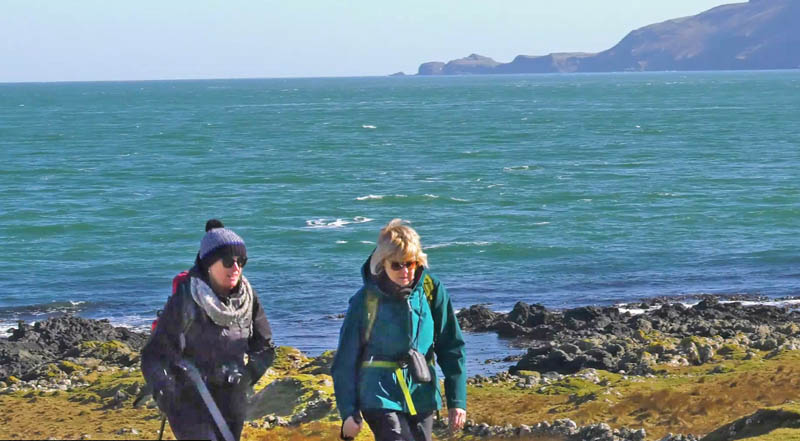 In 1745, the island was purchased by the Rev John Gage. In the later 18th century, kelp production was important, with Rathlin becoming a major centre for production. The shoreline is still littered with kilns and storage places. This was a commercial enterprise by the landlords of the island and involved the whole community.

In the 19th century the island had a population of one thousand. Its current permanent population is around 124. Tourism is now a commercial activity and the island is a favorite location for visitors in the summer, with most coming to view the cliffs and their huge seabird populations. Many visitors come for the day and the island has ample accommation for longer visits.

The Boathouse Visitors Centre at Church Bay is open seven days a week from April to September, with minibus tours and bicycle hire also available. The island is popular with scuba divers, who and explore the many ships wrecks in the surrounding waters. 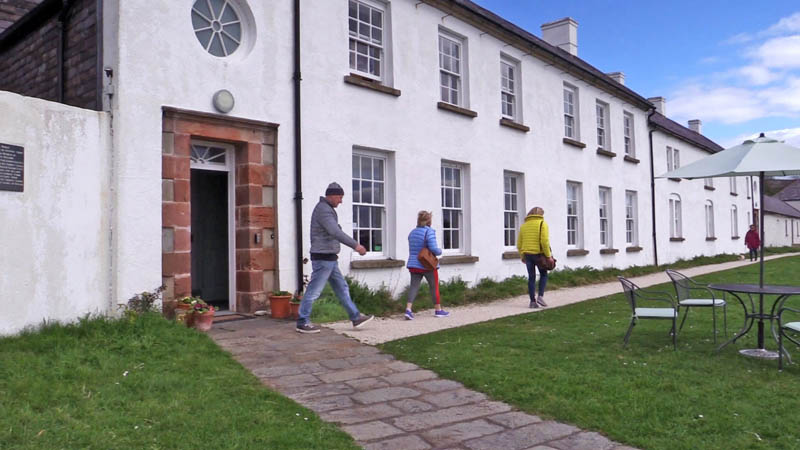 The world’s first wireless telegraph link was made by employees of Guglielmo Marconi between East Lighthouse on Rathlin and Kenmara House in Ballycastle on 6 July 1898. 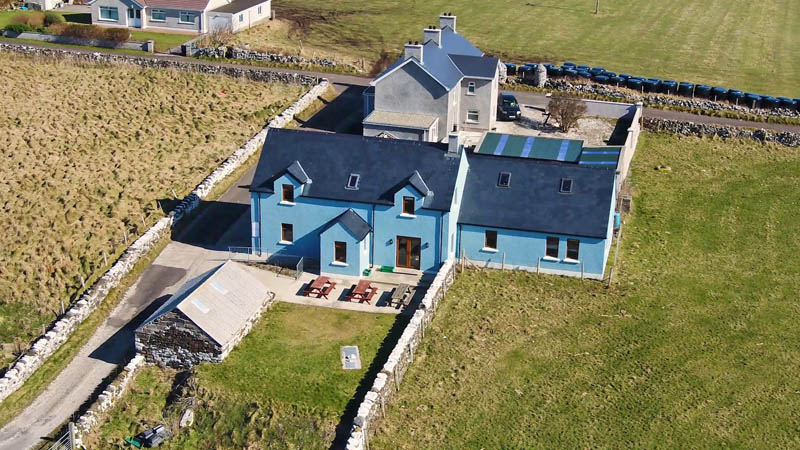 Rathlin have many annual events where visitors are always welcome. The Rathlin Festival is held in July, when there is a week of music and amateur dramatics around the harbour and other family activities. Various competitions in the model yacht racing season are well worth a visit, and sports day is held in August when home-build rafts race around the harbour.

Because of the close distance to Scotland, it has often been at the centre of many an argument over its ownership. It was finally settled in 1619 by a simple test that had also been applied to the Isle of Man, if a serpent or other poisonous snake could survive on the island it was taken as being part of Scotland. If it died then Ireland was the owner, and so Ireland finally was declared the true owner.

Folklore is very much in abundance here on the island. One example is the story of the Enchanted Island. This island is supposed to appear from the sea once every seven years. The story says that if you lift some soil or a pebble from under your feet and can throw it onto the island then it won’t sink back under the sea again.

The island is associated with innumerable famous figures from Irish mythology such as the Tuatha de Danaan. In early Christian times, St. Columba spent time on the island, and perhaps the most famous of our visitors was Robert the Bruce who hid here after being defeated by the English at Perth in 1306 during his fight for the Scottish crown.

It was in a cave in Rathlin that he got inspiration from a spider which tried seven times to bridge a gap between two rocks in order to complete its web, until Bruce himself got fresh courage to make a further attempt at the crown, eventually succeeding at the Battle of Bannockburn. Bruce’s cave is unfortunately only accessible by boat but Rathlin can nevertheless boast the most famous spider in history.

In 1846, with a population of over 1000 on the Island, arround 500 people left the island in search of a better life across the Atlantic. It was at this time the potato famine threatened the existence of many rural communities throughout the island of Ireland. A commemorative stone is erected to their memory above Church Bay.

In more recent times, Rathlin’s shores have been dotted with many shipwrecks, thrown onto the rocks during storms. The most famous was HMS Drake, flagship of the British Navy during World War One which was torpedoed, and sank in Church Bay.
In extraordinary feats of engineering, three spectacular lighthouses were built on the rocky cliffs of the island. The history of their construction is explained in detail at the Boathouse Visitor Centre close to Church Bay. 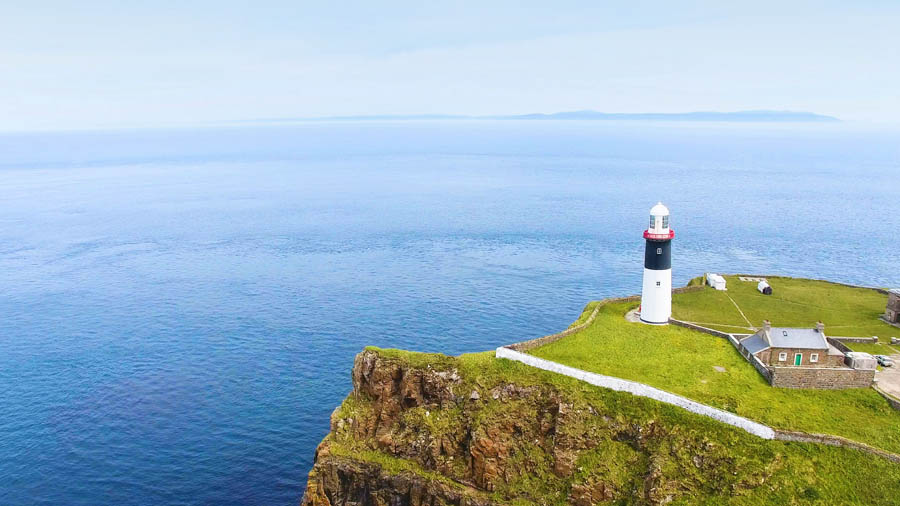 The East Light, high above Bruce’s Cave at Altacarry Head, has been flashing a warning to mariners since 1859. It is the oldest of the lighthouses and is now automated. The particularly impressive West Light was built between 1909 and 1915 and also required the building of a provisional pier, a steep cable tramway from the pier to the top and the road across Kebble. The south light at Rue Point has operated since 1920 and is located at the southern tip of Rathlin opposite Fair head and is only 33 feet above sea level.

The East Lighthouse on Rathlin has attracted many famous visitors in recent times, notably Guglielmo Marconi who was contracted by Lloyd’s Insurers to install a wireless link which would allow announcements of successful trans Atlantic crossings by Lloyd’s ships. On July 6th 1898 Marconi and his associates transmitted the first commercial radio signals across water from Rathlin’s East Lighthouse to Ballycastle on the Northern Irish mainland.

The early owners of the island were the Gage family and they built a Georgian House It was known as the Manor House even after the Land Acts of the last hundred or so years the Gage family remained there. They were still in residence until a few years ago when the house was handed over to the National Trust. As the owners of the island they were entitled to rent from the rest of the islanders. Harvesting Kelp was one of the main sources of income in that period. There were up to 150 kilns in operation at one time and this industry continued until to the 1930’s. Seaweed was collected and stored in stone kilns then burned. Kelp was used to produce soda and iodine. 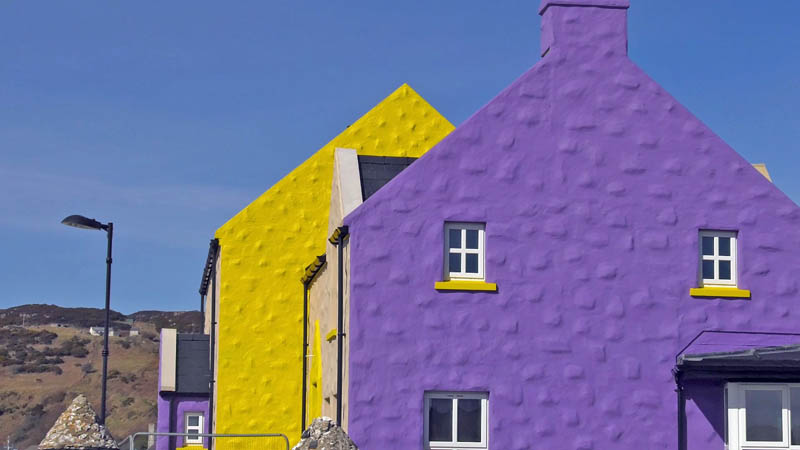 Rathlin Island was infamous for smuggling. Brandy, poteen, rum, tobacco, lace, and other prized products were concealed near Ushet Port on the south-east tip of the island in a building with recesses in the walls, said to be used for contraband.
Rathlin’s renown winds were used to drive 3 turbines. Conn, Aedh and Fiachra to generate most of the Island’s electricity. Prior to their construction in October 1992 there was no mains electricity on the island.

One of Rathlin’s famous visitor was Richard Branson, whose hot-air balloon crashed into the sea just off Rathlin in 1987 after its record-breaking cross Atlantic flight from Maine, USA. Richard Branson and Per Lindstrom were rescued a few miles northwest of Bull Point, where they were taken to safety. Richard Branson later returned to Rathlin and presented the Rathlin Island Trust with £25,000 towards the renovation of the barn at the Manor House.

Looking for a tour guide? Shutter speed Ireland can reccomend Milliken Tours Ireland
A professional, family run tour group who will go that extra yard to make your visit to our country fun filled and memorable.
Contact them here