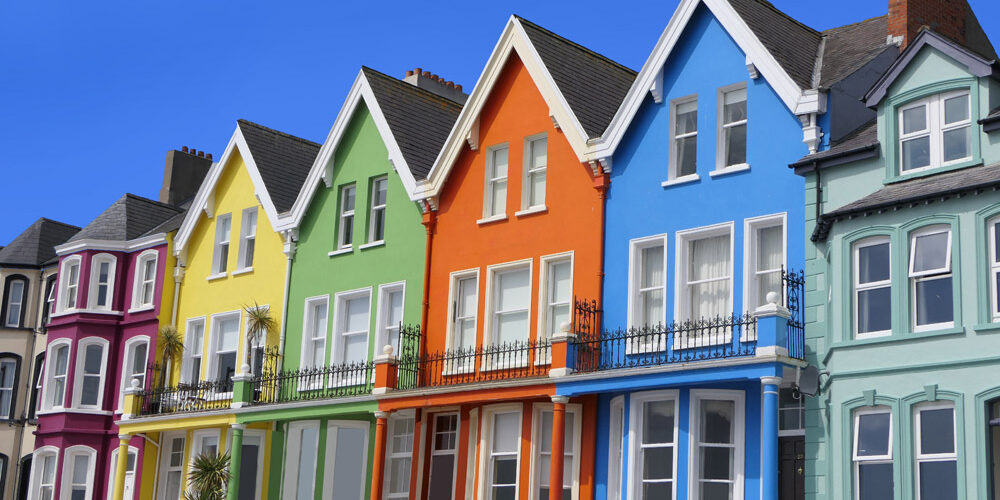 In these difficult times we are living in, safety and security are foremost in our minds.
We are being encouraged to have our holidays and breaks at home rather than risk travelling abroad.

We are fortunate that here in Ireland we are blessed with choice of places to visit and stay. From East to west and north to south there is something for everyone. If you are looking for a lively traditional staycation with music and and song you won’t have far to travel. Hundreds of irish pubs will bid you welcome.  The quiet delightful Antrim coastline with its wonderful scenery and wide sandy beaches is a must for families. The children will relish the fun and freedom.

Whisk yourself away for a luxurious weekend at one of many super hotels . The facilities at these hotel are top drawer. Deep relaxation in a modern Spa is a dream. Perhaps a round or two on the golf course will make that Spa even more exciting. In the evenings a scrumptious dinner to complete the day. It’s all there, right on your doorstep.

Shutterspeed Ireland have put together a list of memorable places. All of which have been tried and tested by the millions of visitors who have flocked to Ireland over the years. 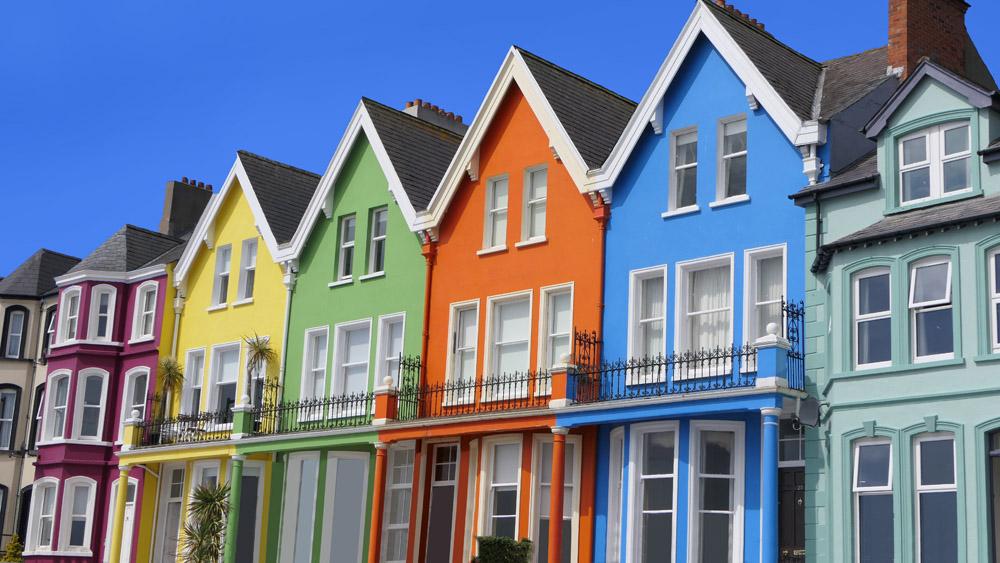 Whitehead is a small seaside village on the east coast of Co Antrim Northern Ireland, between the towns of Carrickfergus and Larne. It sits within the civil parish of Templecorran, barony of Belfast Lower, and part of Mid and East Antrim Borough Council.

A photographer’s delight, Whitehead harbour was built around 1848 by David S. Kerr.  The town had a thriving limestone and brick trade, as well as a ferry passenger service from Belfast to Whitehead showed a lucrative time for the town.

A sunny day in this East Antrim village in N. Ireland, is a photographer’s delight. From the Blackhead lighthouse on the edge of Belfast lough, to the colourful dwellings in Whitehead Bay which excites the creative imagination to experiment with such a stunning photogenic landscape.
ShutterSpeed Ireland has a unique selection of the picturesque cliffs and walkways of the East Antrim coastline. 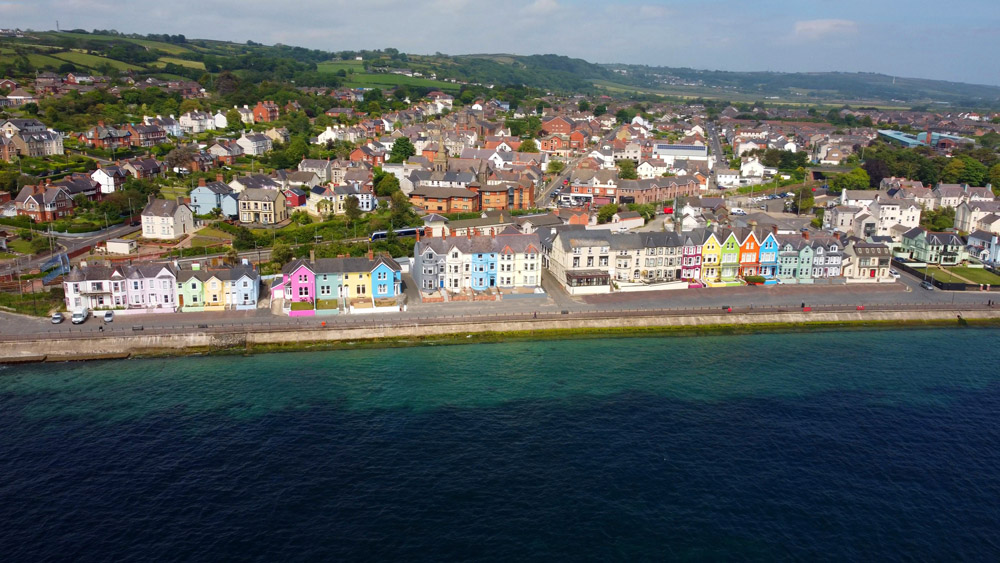 The Gobbins Visitor Centre is open daily. This spectacular location is where you can truly escape your everyday life and experience nature in its finest.

The centre offers a personally guided walking tour around its spectacular cliffs. You will experience the Irish Sea’s wind, marvel at tales of local smugglers, witness its native sea birds and keep your eyes open for some dolphins swimming off the rugged coastline.

The Carrick-a-Rede Rope Bridge must be the most famous bridge in Northern Ireland.

The rope bridge near Ballintoy links the mainland to the small island of Carrick-a-Ried, where fishermen used it to access their nets. The bridge spans 22 metres and is 33 metres above the sand beach below.

The bridge is now a tourist attraction and is owned and maintained by the National Trust which welcomes over 200,000 visitors every year. The bridge is open all year round and people may cross the bridge for a small fee. Among the rugged landscape of the isolated island, you can let your mind wander and discover a tranquil and beauty that is so unexpected. 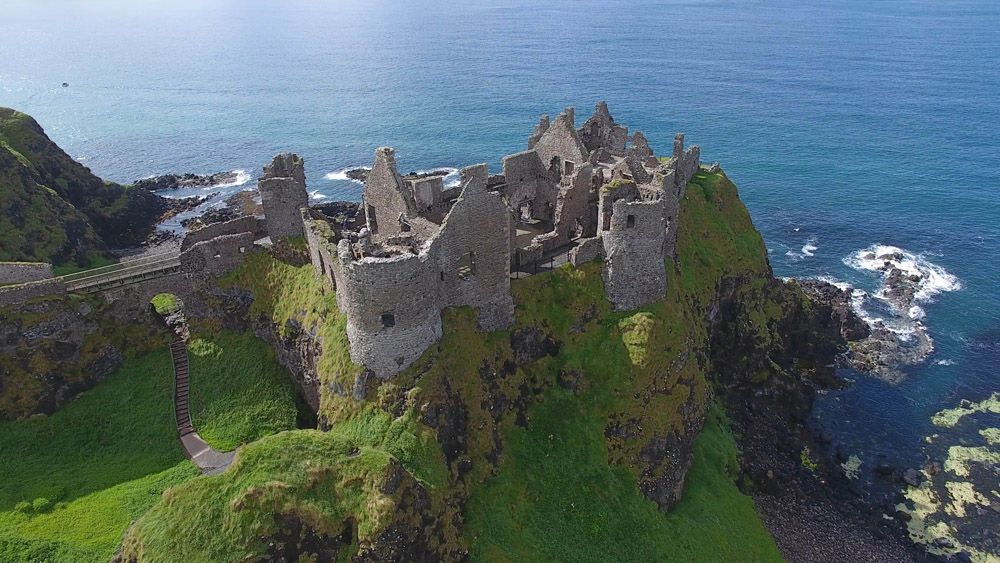 Dunluce Castle was Built in 1223 by the 2nd Earl of Ulster Richard de Burgh.

It is on the site of an earlier fort dating back to the Viking ages. In 1510 the castle was used by the MacQuillian family, locally known as the Lords of the Route. The castle was passed down the MacDonnell clan. It was Somerled MacDonnell who improved the castle in a Scottish style in 1580.

One of the Spanish Armada ships wrecked on the rocks below the castle.

The MacDonnell’s sold its cargo and with these funds they installed the cannon in the castle’s gatehouse. The castle remained in their family until the end of the Battle of the Boyne in 1690 when it was left abandoned and then fell into ruin. The castle has been used in a number of films such as villains’ lair in ‘The Medallion’ with Jackie Chan 2000. The castle appeared in the artwork of the inner gatefold of the 1972 Led Zeppelin album Houses of the Holy.

Dunluce Castle balances on the edge of a rocky outcrop on headland onto the Irish Sea. Access to the castle is via a bridge connected to the mainland. Legend has it that the castle’s kitchen collapsed into the sea, with only a small boy surviving the incident. The medieval castle is now in a totally ruined state but still has partial remains of its round corner towers and outer wall. The castle has visitor facilities and has guided tours offered over the summer months. 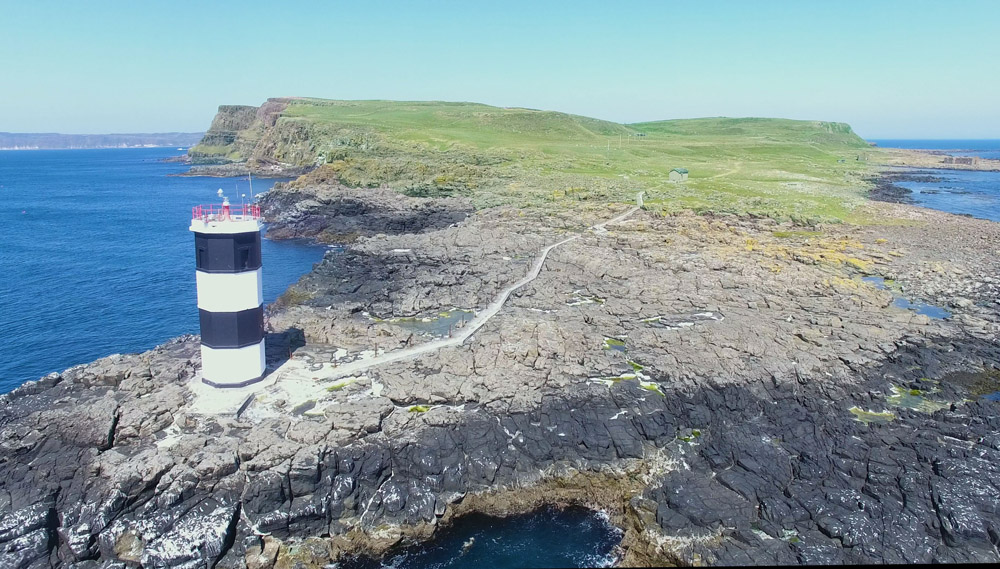 The island is an area of Conservation which has Northern Ireland’s largest seabird sanctuary.

At Rathlins Seabird Centre, you can see close-up view of Northern Ireland’s biggest seabird colony. Puffins and many other seabirds congregate there in their thousands to breed from April to September.

The centre has a viewing platform, with binoculars available to use. As part of Irish Lights’ Great Lighthouses of Ireland trail’, visitors can see the islands unique ‘upside down’ lighthouse. 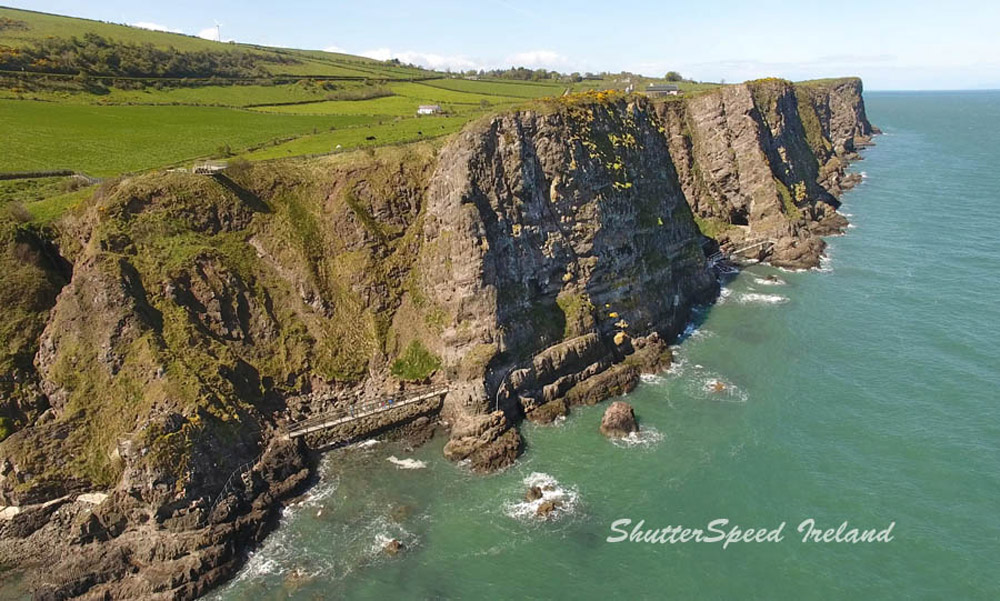 The Gobbins cliff pathway was built by Berkeley Deane who was an Irish railway engineer. He designed and built the path to be a tourist attraction for the Belfast and Northern Counties Railway Company.

Thousands of people visited The Gobbins during the 20th century. The Gobbins Cliffs, caves and natural aquariums has no parallel in the UK as a marine cliff walk’.

The Gobbins walk takes you along a narrow path passing its dramatic cliff face, across spectacular bridges alongside the crashing waves of the Irish Sea, up and down rugged staircases carved deep into the cliffs and caves that were once used by smugglers and pirates.

The Path is quite a difficult trek as it is narrow and uneven below with its access by a very steep pathway.

Due to the nature of the rugged location visitors must wear a safety helmet when experiencing The Gobbins path. Blackhead large Lighthouse can be seen nearby. 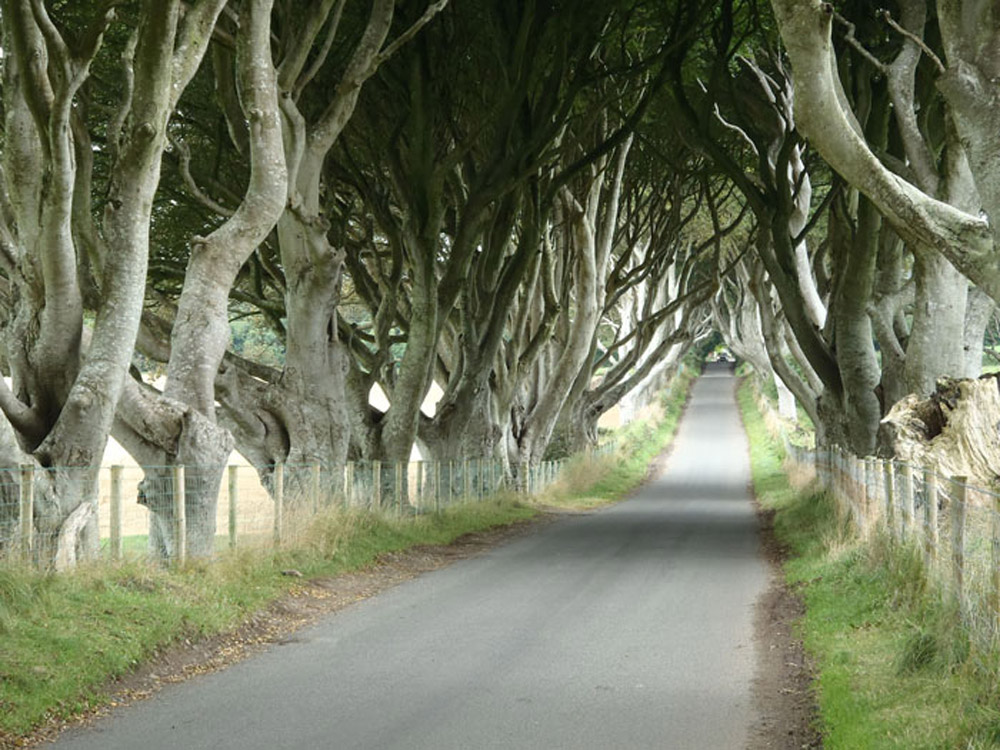 Beach trees at The Dark Hedges

The Dark Hedges are located in Co Antrim on Bregagh Road between the small villages of Armoy and Stranocum. The famous hedges are on a road that is covered in intertwined beech trees. These trees meet above the road and form a majestic tunnel above the road out of the branches. This tree tunnel has been used in HBO’s Game of Thrones as one of the series’ filming locations, and it has become increasingly more popular since its appearance on the hit show. 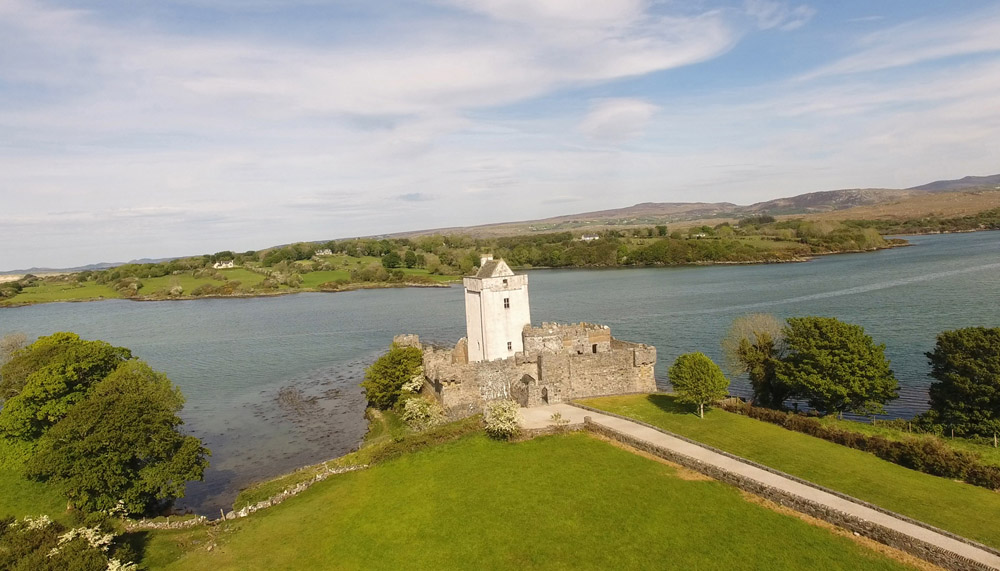 Doe Castle sits on the shoreline of County Donegal.

Built in the early 1400’s in the style of the Scottish tower houses, it is one of the better fortalices in Ulster. The castle lays on a small peninsula, surrounded by water by three sides. The castle has a moat in the landward side.

The Castle was built by the O’Donnell’s in 1429. In the 1444 it had come into the hands of the gallowglass Mc Sweeneys and remained in their family for nearly two hundred years. In the majestic Plantation of Ulster in the 1600’s it fell into the hands of English settlers.

The castle changed hands repeatedly during the 17th-century struggle for control of Ireland between the Irish and the English. in 1650, Charles Coote, the Governor of Londonderry, took possession of the castle.

The castle was bought by Sir George Vaughan Hart and inhabited by his family until 1842.

In 1934 the castle was declared a ‘national monument’ and was purchased by the Office of Public Works. The main Tower house of the castle underwent a major restoration in the 1990s.

The Castle grounds are open to visitors with guided tours around the tower-house is available over the summer months. 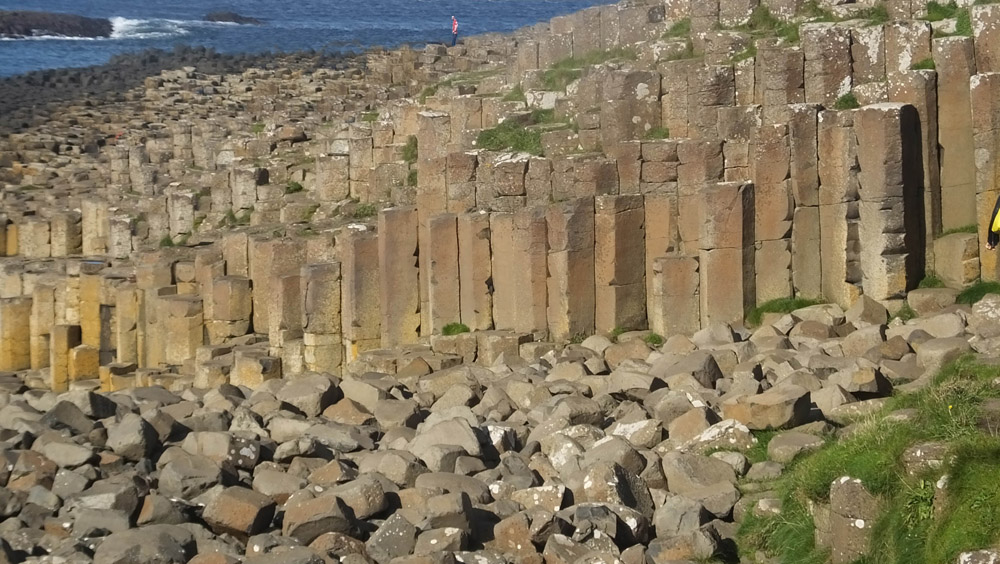 Man on The Giant’s Causeway columns

In the 1980s, The Giant’s Causeway was declared a World Heritage Site and a National Nature Preserve. It is named the 4th greatest wonder in the United Kingdom.

The Giant’s Causeway is made up of over 41,000 basalt columns.

These columns are a result of a volcanic fissure eruption. The tops of the columns naturally form steppingstones, making it easier to navigate about them. Located in County Antrim, it sits on the coast of Northern Ireland. 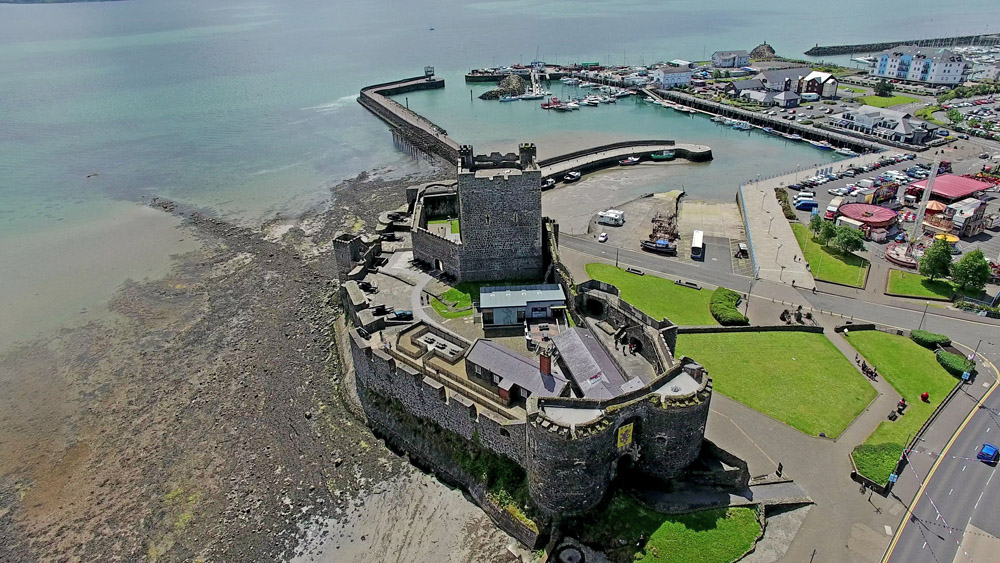 Carrick Castle was built in the 1170’s by Norman knight names John de Courcy. The Castle was used as his headquarters until 1200. The original castle site consisted of a bailey, inner wall and great hall with surrounding buildings which helped protect it from attacks by the sea. In the early1200’s de Courcy lost the castle to Hugh de Lacy.

In 1210 the castle came under attack from King Johns men and larger curtain wall was built to help protect the castle in low tide. They also added large adaptations at the gatehouse so a vault was produced and completed in 1255.

The castle had remained in the hands of the crown throughout the 16th – 17th century with many improvements made to strengthen the castle which included structures for cannons and gun ports. However, that did not prevent it from being taken many times, most notably in 1690 by General Schomberg for King William III, again in 1760 by the French, Francois Thurot. 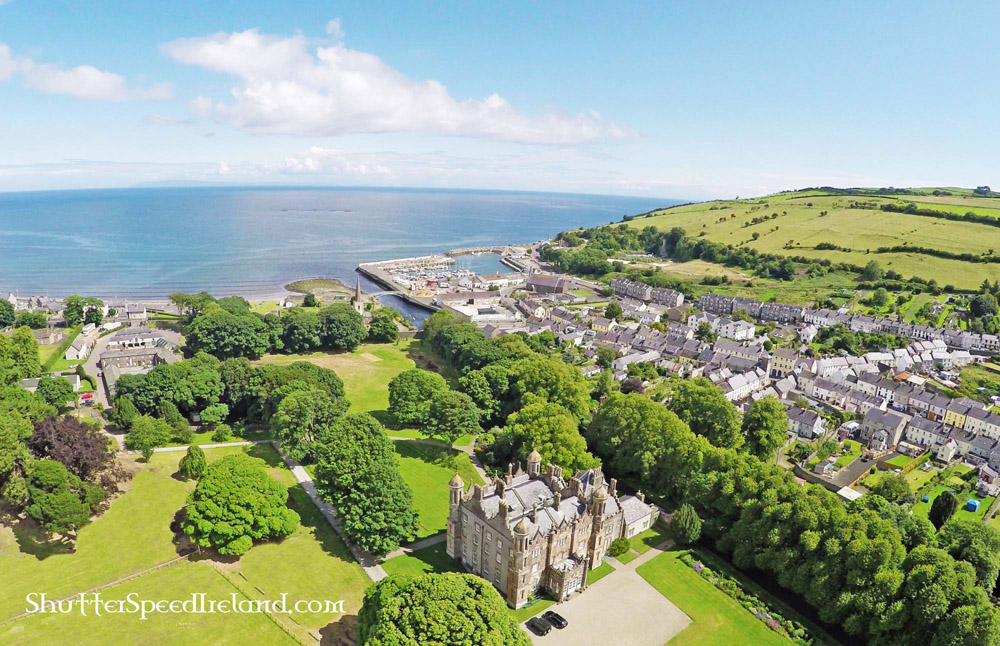 This castle is located on County Antrim’s coastline at Glenarm. It was owned by J. Bisset who acquired the lands from Larne and Ballycastle from Hugh de Lacy, the Earl of Ulster. Bisset made Glenarm his capital, and in 1263 a castle was built at the centre of the present village.

Sir Randal MacDonnell, 1st Earl of Antrim built the new castle in 1634. Glenarm Castle is currently owned by Randal, Viscount Dunluce, the son of Alexander McDonnell and the 9th Earl of Antrim.

The Castle has a spectacular Walled Garden which is open to the public in the summer months which hosts many events including the Dalriada Festival every July.

Glenarm castle also has special open days where you can see the family portraits and Irish furniture from the 1600’s. This picturesque Castle sits on an area of outstanding natural beauty in the Glens of Antrim. 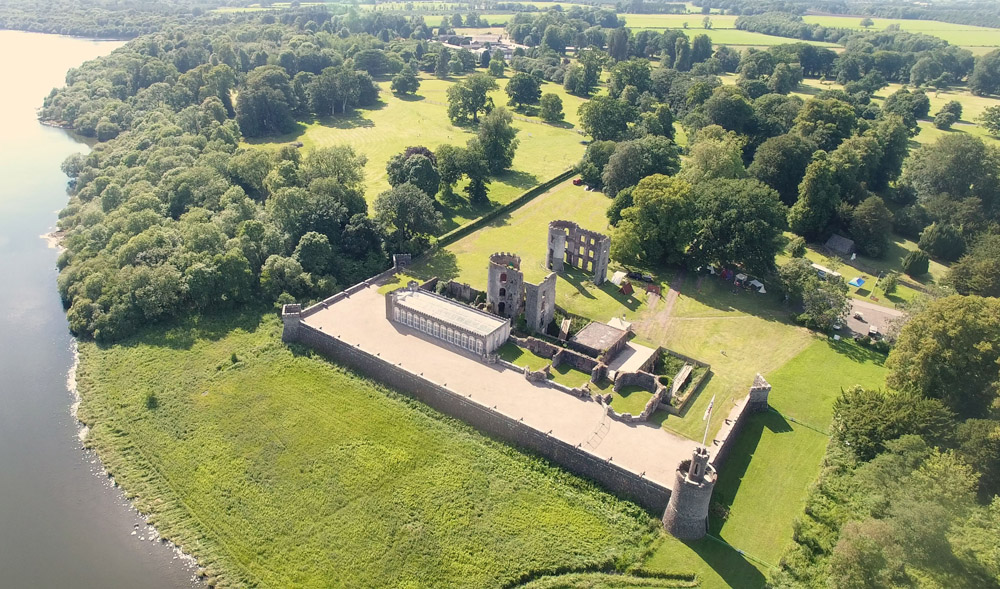 Shanes Castle was originally named Edenduff Castle. In 1721 it became known as Shane’s Castle, named after the Grandfather Shane McBrien O’Neill. It was home to the O’Neill family since 1343, this family were the Kings of Ulster for over 1,000 years. The castle stands in the country park on the north shore of Lough Neagh was burnt to the ground in 1813 and was left in ruins. The O’Neill family still live on-site at the present house which was built in 1957.

The castle had been reshaped by the famous architect J. Nash. The beautiful arched rooms remain, and well worth a visit. Shane’s Castle was used as a filming location for ‘The Game of Thrones’ in the 1st and 2nd series.

ShutterSpeed Ireland specializes in photographs of Ireland and its cultures.  It is a unique medium to work in. We have thousands of stunning images of our country and coast in search of that ‘something special’ that image which sets us all talking. We hope you like the images i have on display here.