You are here:
Animals & Wildlife 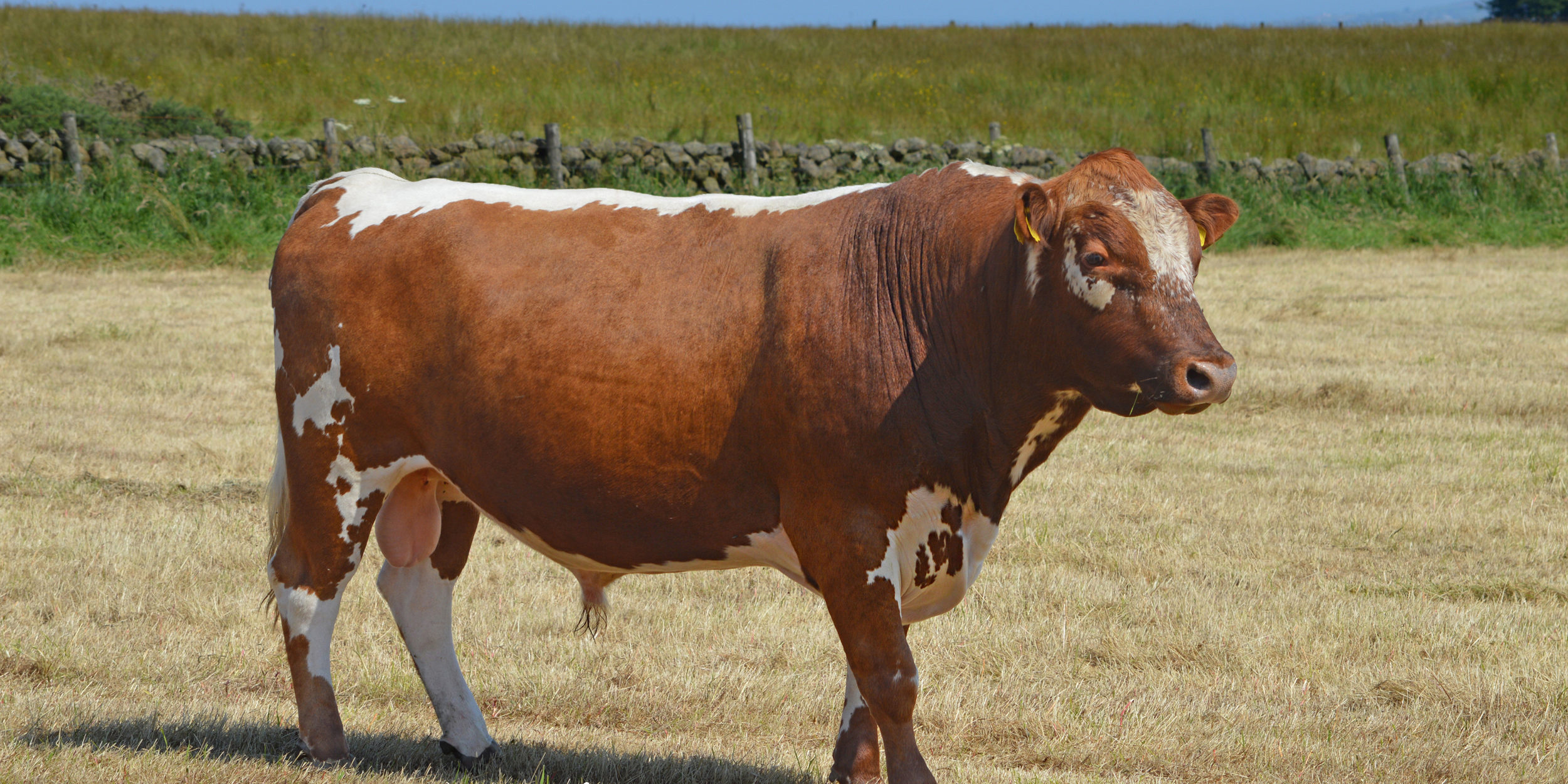 They have no horns and are generally red with a white line on the back and stomach.
They are usually known to have a speckled face.

The Irish Moiled is one of our rarest and most distinctive native cattle breeds. Traditionally a dairy cow, it has earned the reputation as a truly dual purpose animal, producing high quality beef and milk from the grasslands of Ireland.

Moilies are slightly smaller than average cattle at around 500 kg. It originated in County’s Sligo and Leitrim, but the breed is now found throughout Ireland. The name Irish Moiled Cow is from the term “Maol from the Gaelic language and relates to the distinctive mound on top of the head.

Moilie’s are generally easy to handle with a placid docile temperament and are also easily maintained than most other livestock breeds.

Moilies were popular throughout Ireland in the 1800’s, but it was in the province of Ulster that they thrived. The Moilie is Ulster’s original and only native cattle breed. 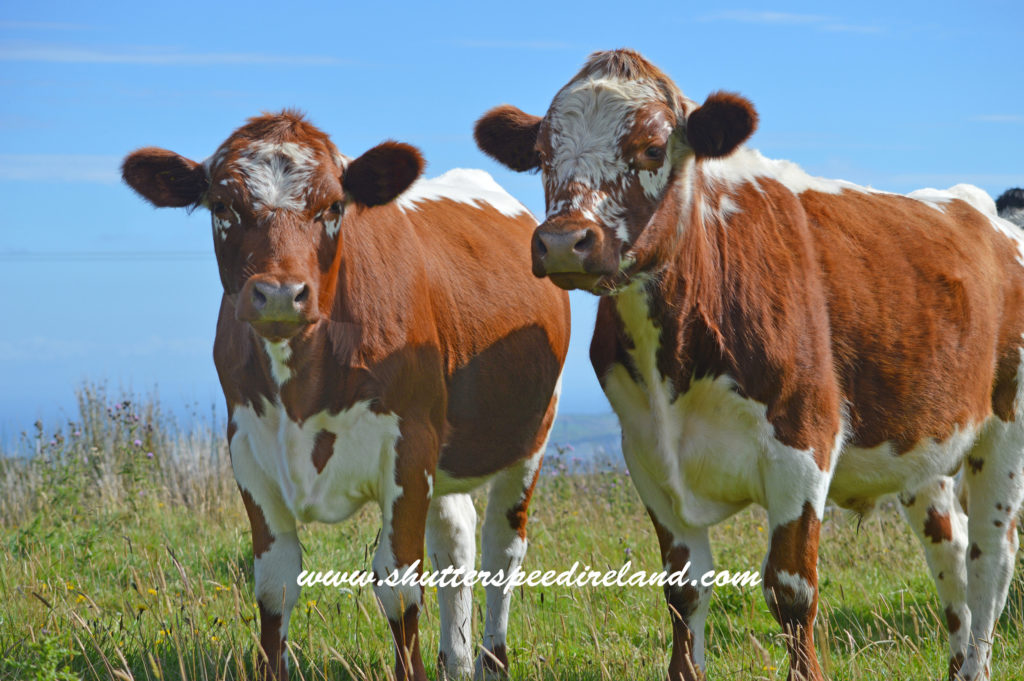 For many years, as popularity of the breed grew and classes were held at the Royal Ulster Show, but the introduction of new, more specialised dairy and beef breeds numbers of Irish Moileds began to decline. The decline was so dramatic that by the 1970’s the breed had been reduced to less than 30 females maintained by two breeders in Northern Ireland – David Swan of Dunsilly and James Nelson of Maymore.

The Irish Moiled Society was formed in 1926 to develop the breed and create and maintain a stock Herd Book. In 1982 the Society was revived with the encouragement of the Rare Breeds Survival Trust. Since then numbers have increased dramatically with help from valuable research and guidance from both the Trust and the Genetics Department of Liverpool University. This encouragement was greatly appreciated by the Society.

Today the Society has a well established DNA testing programme to ensure validity of pedigrees and the integrity of this important gene pool. Every animal must now be DNA profiled and parentage proven before it can be registered.

In 2008 a breed conservation strategy was launched. It was hoped that this strategy will help maintain the genetic base of the breed and also reduce to a minimum any increase in inbreeding and ensure a successful future for Irish Moiled Cattle.

The Irish Moiled Cow can be relied upon to produce a calf every 12 months if kept in good health and body condition and is running with a bull. Artificial insemination is also successful. They will calve to a continental bull without difficulty and have sufficient milk to do a good job with the cross calf. They will continue to breed satisfactorily until at least ten years of age.
Many have continued to 15 years and beyond. 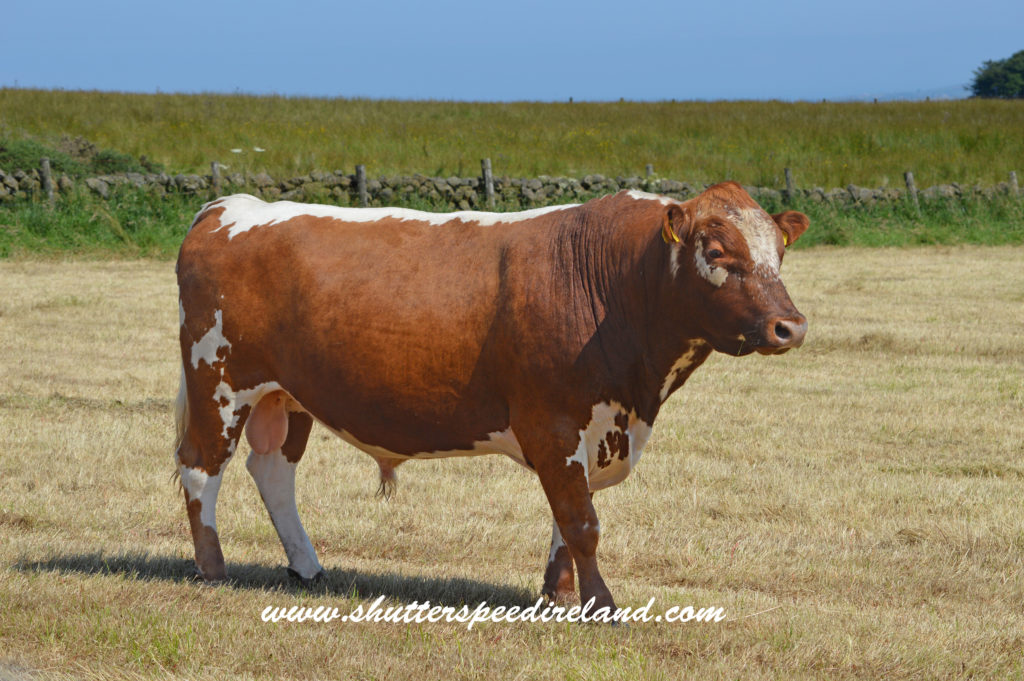 Irish Moiled meat is remarked to be of great quality and has a very recognisable flavour. This cow is known to produce a good beef in poor conditions but needs care to protect it from becoming overweight and making the beef too fatty. It is said that the quality of Irish Moiled beef had, almost literally, saved the breed from extinction. As reported by a beef distributor, the turnaround for Irish Moiled beef has been reviewed to be of excellent quality by their customers.

They are a famous cow for possessing the capability to raise almost any breed of calf with little to no difficulty. They contain more than enough milk for their calves and never have a problem with starving udders. According to common belief they have an irregularly large stomach in order to consume more poor quality grass and moss.

The Irish Moiled bull has a very passive temperament according to owners that have had an experience with this bull. They are an ideal bull for grazing because they leave the stubs of grass in the ground in order for that grass to grow back more rapidly. One standout about this bull is that they are also “extremely hardy and alert at an early age”.

Moileds grow a thick winter coat and out-winter happily although being a heavy animal they will ‘poach’ soft ground and at home on most types of terrain. Silage/hay will be needed for out-wintering in most situations.
Female calves are either retained within the herd or find a ready market with other breeders of pedigree Irish Moileds.

Irish Moiled beef has superb tenderness, is highly marbled and has a distinctive flavour.
Steers can be fattened economically on good quality forage without the need for concentrates.
You can never miss a pedigree Moilie with its characteristic colouring. Typified by red ears and nose and white stripe along the back, the Moilie is as unique in features as their premium beef is in taste. 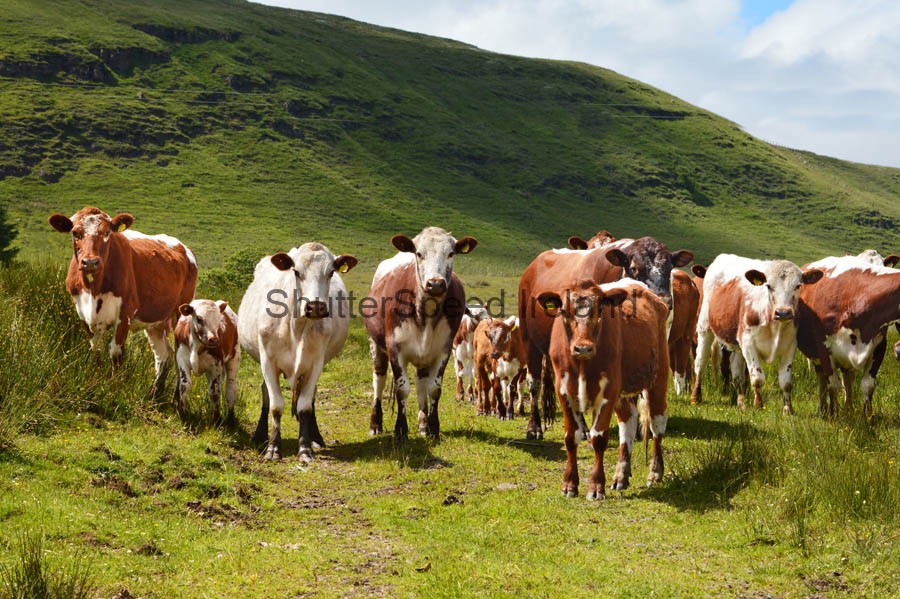 Tradition has it that they are “big bellied” to consume and digest large quantities of poorer quality forage which was their traditional diet. They are ready browsers, especially of willow ash and ivy, which makes them ideal in extensive or conservation grazing situations.

The origins of the Irish Moilie are surrounded by Irish myths and legends. It is believed that the Vikings raided Moilie cattle from Ireland and today in Scandinavia you can find distant cousins of our Irish Moilie cow.

This pedigree breed requires a little longer to mature compared to other breeds. It is this slow-maturing process which results in rich marbling that gives Moilie beef it’s succulent flavour.

The magic is in the marbling, resulting from our slow-maturing processes. Our melt-in-the-mouth Moilie beef requires no rich sauces. Served with a sprinkle of salt this velvety, buttery beef is good enough to be enjoyed on its own.
ShutterSpeed Ireland have a great selection of photos of Moilie Cattle and other farm animals
and wildlife.

Check out our selection of photographs here
Our Facebook here

More info of the cattle can be found at www.irishmoiledcattlesociety.com
Their Facebook here