Ireland has a rich history of craftsmanship, with certain practices going back as far as

Though born out of necessity, crafts of Ireland have persisted throughout the ages,

passing from generation to generation and evolving to keep up with changing times.

With numerous, ageless crafts, Ireland’s enduring workmanship is both beautiful and

historical. Some of the more traditional, handmade art forms include:

Though you can find the products of Irish craftsmanship at various shops in populated cities, the most authentic experience can be found in the Irish countryside where you can meet the craftsman hard at work.

Keep reading to learn about these unique and fascinating crafts that embrace heritage and artistry.

steps. As one of the oldest textiles in the world, Irish linen has a deep history. Linen was used in

the 11th century for clothing, and the linen trade grew during the 14th and 15th centuries.

Today, Irish linen is known in the luxury market for its high quality and distinctive draping

appearance. Moreover, its physical properties have encouraged use in the industrial textile 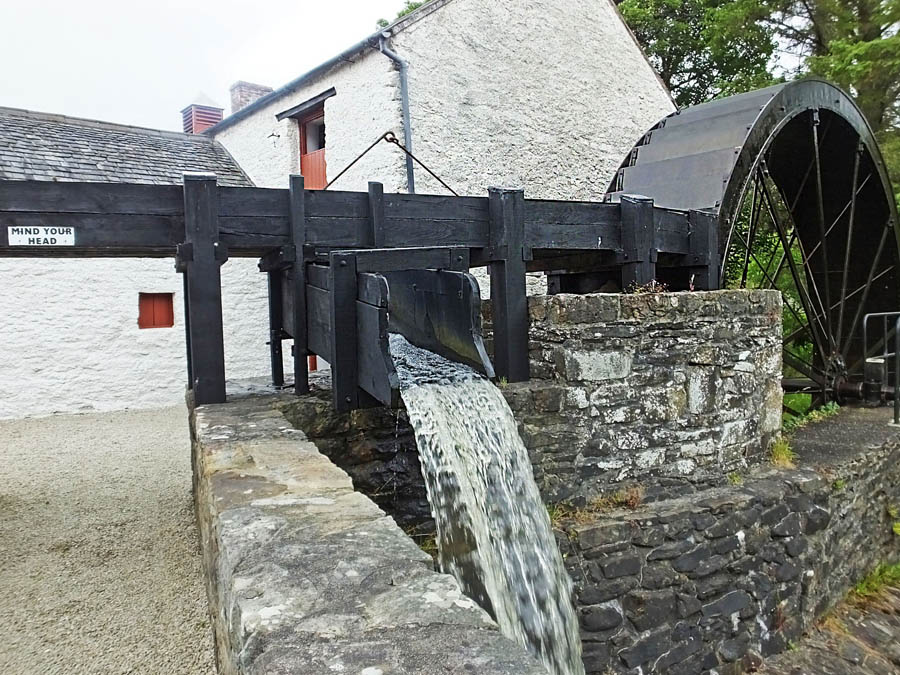 The flax plant was one of the first fibers ever used in textile making, and growing the plant was

traditionally a family enterprise. Men were responsible for seeding while women did the

weeding, an essential factor in the quality of the fiber. Everyone, adults and children alike,

partook in harvesting the plant when it was ready. 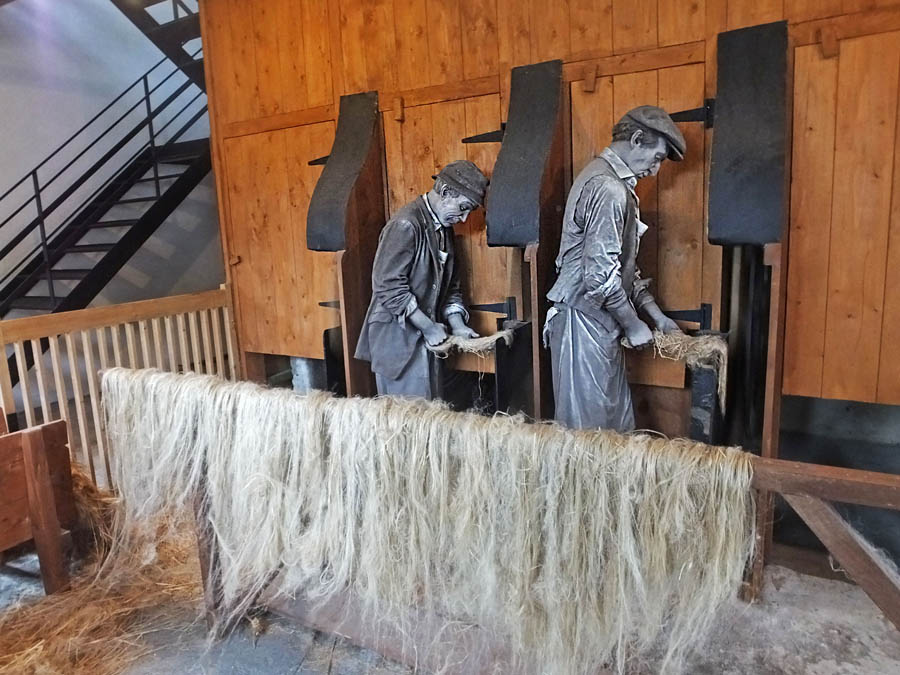 Flax was sown in May and harvested in August. Though the plant prefers fertile, weed-free soil,

it can thrive in most environments that do not contain clay or sand. Typically, it grows about a

meter tall and is known as the “wee blue blossom” because of its flower’s pale blue color.

To release the fiber from the cellular and woody stem tissue, men performed a process called

retting. To encourage quick decomposition, the stems were bundled with beets and allowed to

steep in a pond, river, or dammed body of water.

Unsurprisingly, the retting process produced an unmistakable and unfortunate stench that 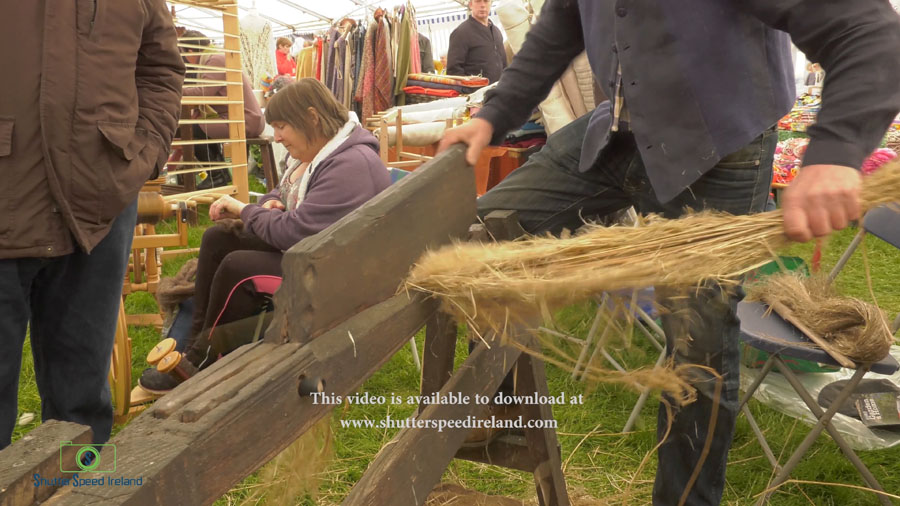 All in all, the process took ten days before the rotting mass could be extracted from the water.

In a procedure called scutching, the stems were beaten with a wooden mallet or blade to

separate the flax fibers. Afterward, a hackler prepared the fibers for spinning by straightening 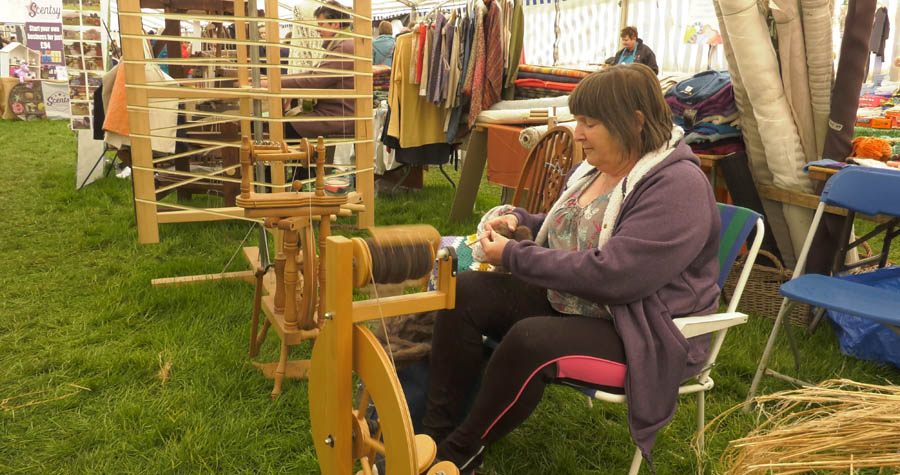 A woman spinning and weaving Linen

into yarn. While spinning was performed on a low Irish wheel, the yarn was woven into a cloth

called bandle linen on a loom. 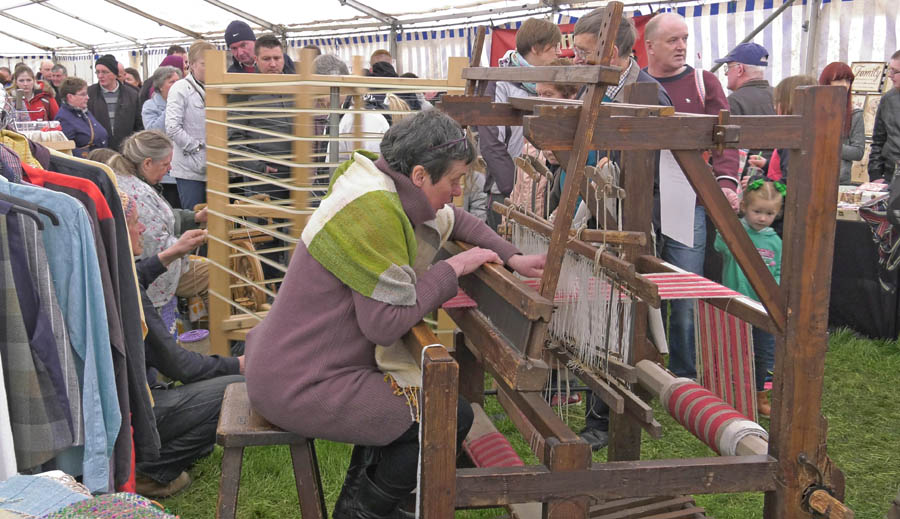 A woman spinning and weaving Linen

of water and ashes, seaweed, or fermented bran. Once rinsed and dried in the sun, the cloth

was steeped in buttermilk, and the process repeated. To close the weave, the cloth was

The tradition of Irish basket weaving or willow weaving has been around for centuries,

and some ancient designs have remained unchanged. Throughout history, Irish baskets served 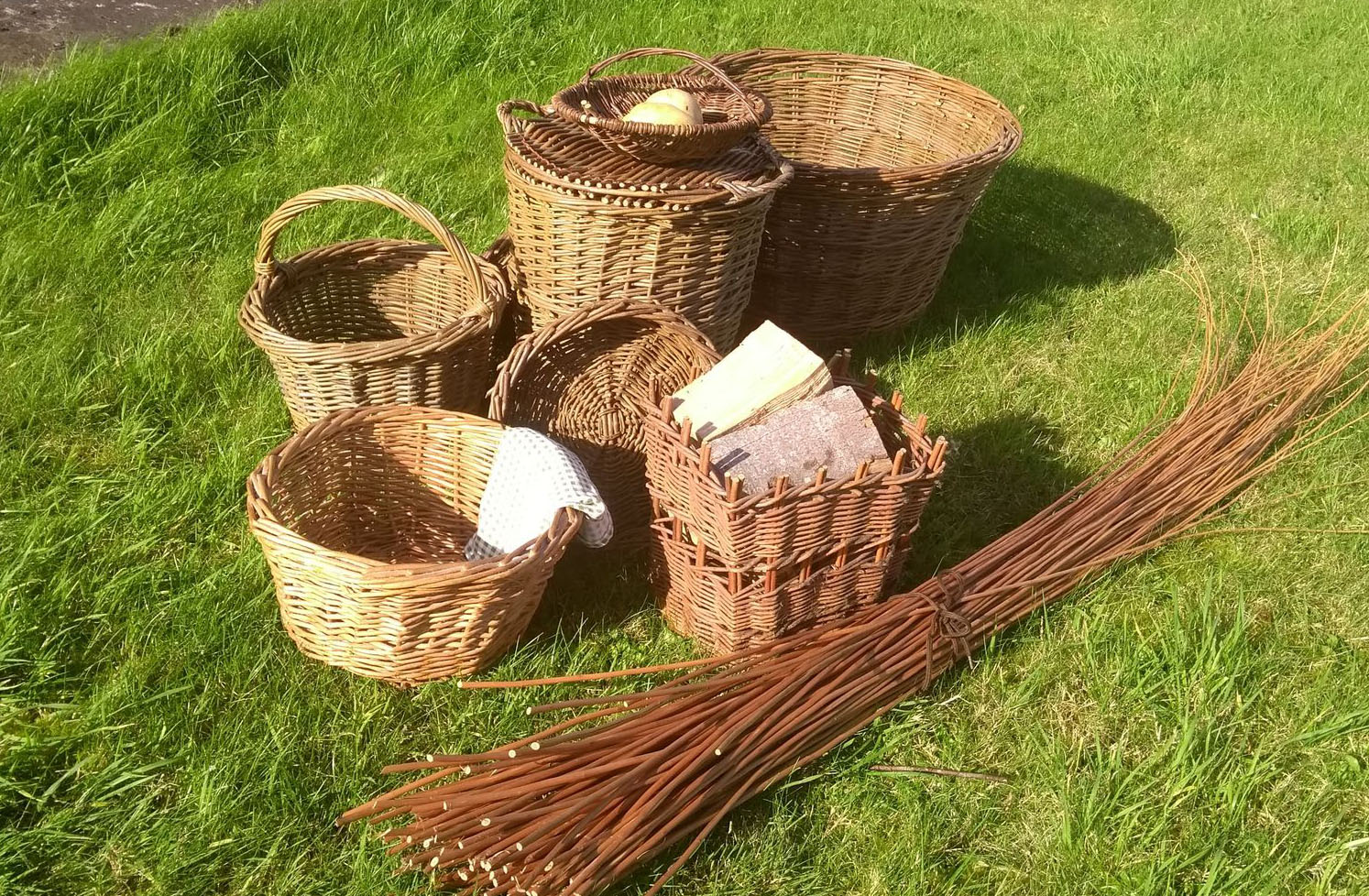 Traditionally, baskets were made from woven willow rods, also known as saileach.

Willow trees thrive in the sun and moist soil but can adapt to sandy or dry circumstances.

Once the willow is cut, it needs to be dried for several months. Once dried, it is made supple and

pliable by soaking in water for a week. 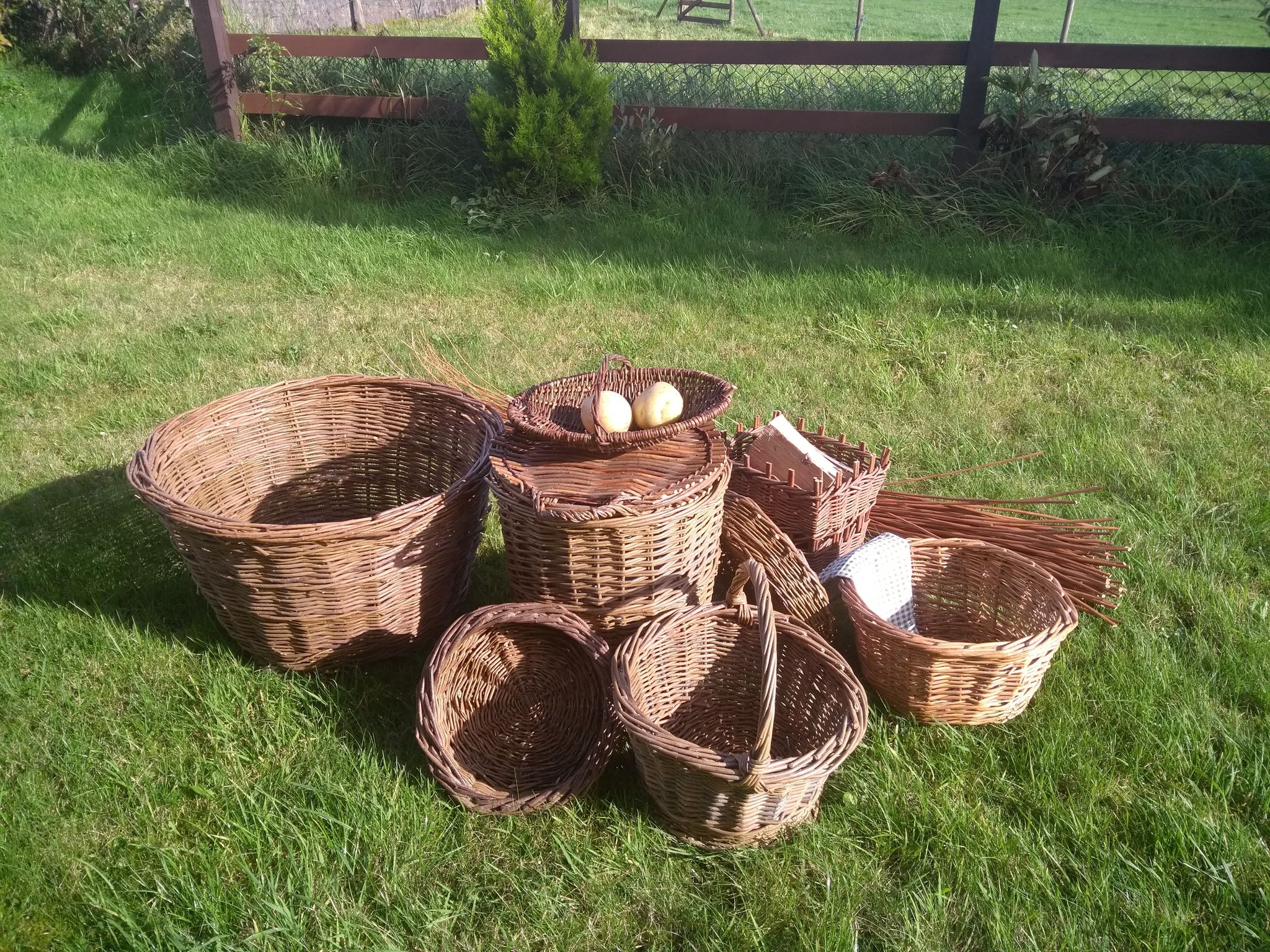 Baskets were also made from other materials, including hazel, heather, common field rush, and

bulrush. Since the late 1980’s, the Irish Basket makers Association has sought to promote weavers

methodologies and practices to help modernize a precious tradition. 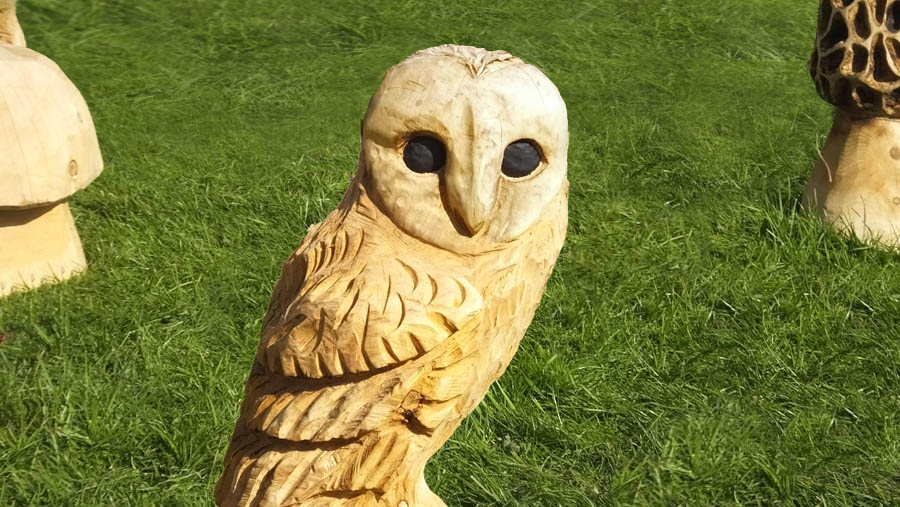 Compared to smiths or braziers, woodworkers were not featured quite as prominently in ancient

literature. However, carpentry was an especially important trade as there was much woodwork

to be done compared to other materials. For instance, houses were nearly always made from

Unfortunately, Irish furniture made of oak from the 1700’s is mostly lost and incredibly rare to

find. Starting in 1725 and persisting throughout the 18th century, elaborately carved mahogany

surfaces became a particular feature of Irish furniture, though the material was introduced from

that reflected a growing fascination with Ireland’s ancient, cultural, and artistic past. Designs

traditions. For instance, the shamrock symbol is a universally recognized national emblem

featured in most bogwood pieces. 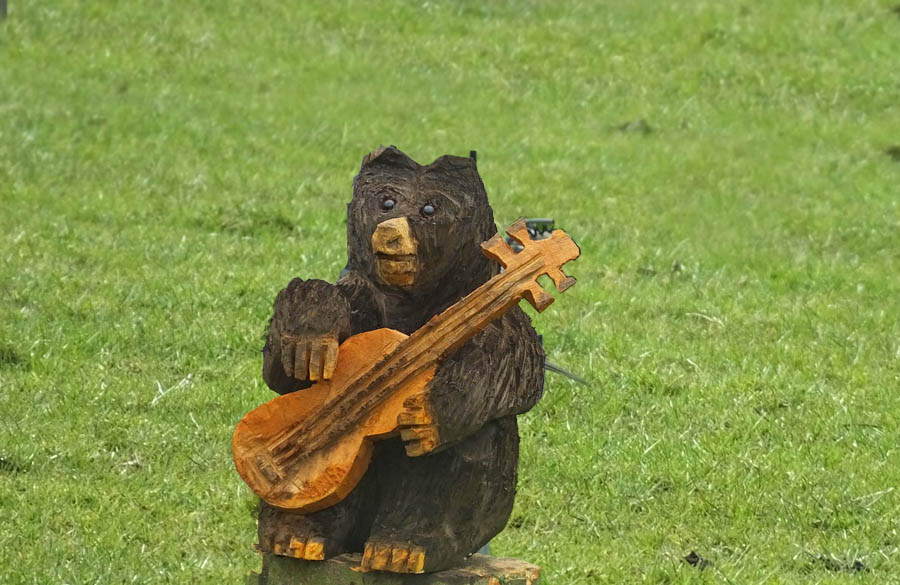 The first form of Irish ceramics is dated from 6,000 years ago and was made by firing ground

clay into pottery. Around the 13th century, the Anglo-Normans introduced the potter’s wheel to

 The most common type was coarse ware, which included pieces for everyday use that

and jugs, and flowerpots.

 The second type, fine ware, was not made until the late 17th century and was inspired

From functionality to aesthetics, ceramics evolved out of necessity and a desire for beauty. As

an example of a timeless appreciation for true craftsmanship, prominent Irish ceramic

companies from as early as the 1800’s still exist and operate today.

Another one of Ireland’s ancient traditions is the art of cutting peat in a bog. Once the peat has
been cut, the peat is then known as turf and this is a practice that still continues today around

much of rural Ireland as they use the turf as a source of fuel. 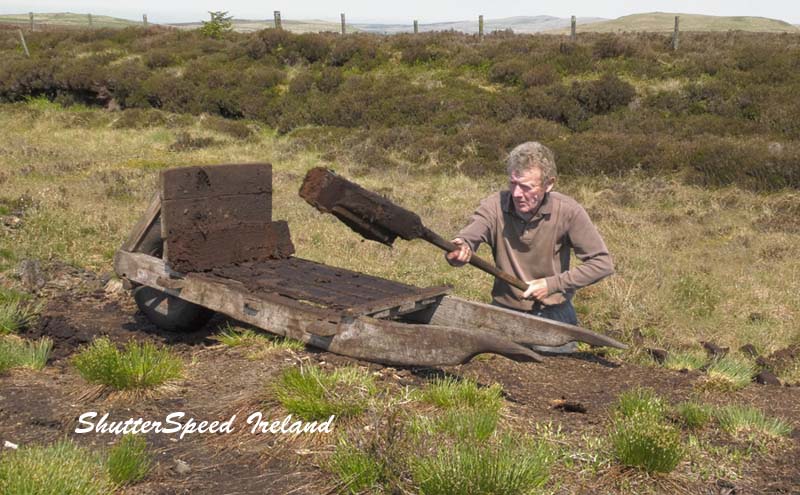 vast bogs that are found across Ireland.  Most modern bogs or peatlands were formed around

about 12,000 years ago and because the peat is made from decaying organic materials the

peat often preserves the history of the plants including pollen. 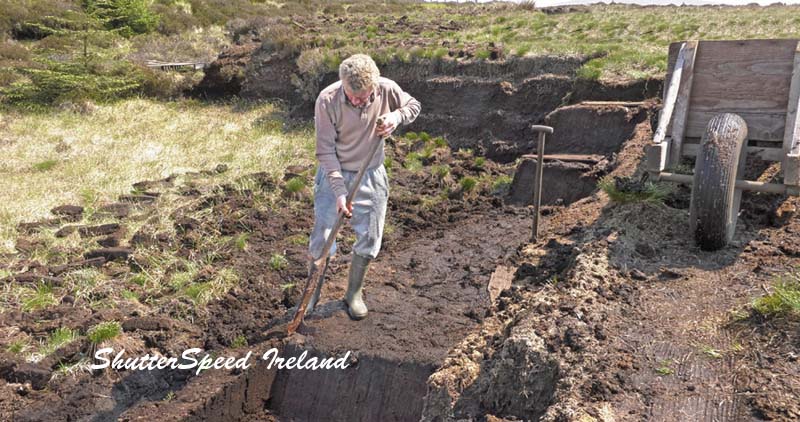 Once cut the peat is left to dry for a few months, it is then turned, bagged and used as fuel

by heating homes. In many countries, including Ireland and Scotland, peat has traditionally

been used for cooking and peat is stacked to dry in rural areas.

It remains harvested on an industrial scale for this purpose in countries such as Ireland.

Its insulating properties make it useful in industry. 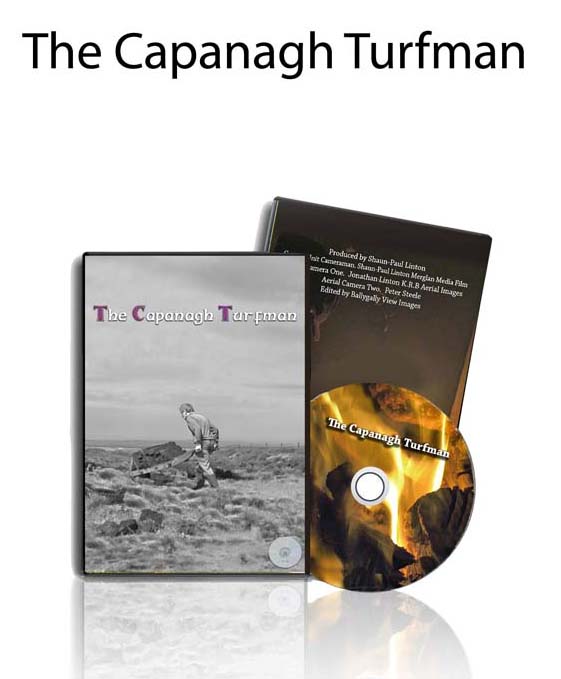 ShutterSpeed Ireland has a previous blog, where we look deeper into the craft of turf cutting.

This can be viewed here.

We also have a dvd on the story of a gentleman cutting turf in the traditional way by spade.

This can be purchased here.

In 1903, Susan Pollexfen Yeats said, “The idea is to make beautiful things…Everything as far as

possible, is Irish.” Such a declaration embodies Ireland’s Arts and Crafts Movement of the

1890’s to the 1900’s, which resulted in a cultural renaissance whose influence can even be seen

more than 40 traditional Irish crafts that showcase a rich and distinct history. Other crafts

include leatherworking and metalwork, among many more. Exploring and appreciating such

ShutterSpeed Ireland has a large selection of photos and video multimedia of ‘Crafts of Ireland’
which are available to download Here
Some of the information sourced in this blog has come from-
www.ireland.com
www.irelandbeforeyoudie.com
www.discovernorthernireland.com

Are you visiting Northern Ireland?
Northern Ireland on Tripadvisor Here
Looking for a tour guide? Shutter speed Ireland can recommend Milliken Tours Ireland
A professional, family run tour group who will go that extra yard to make your visit to our country fun filled and memorable.
Contact Here